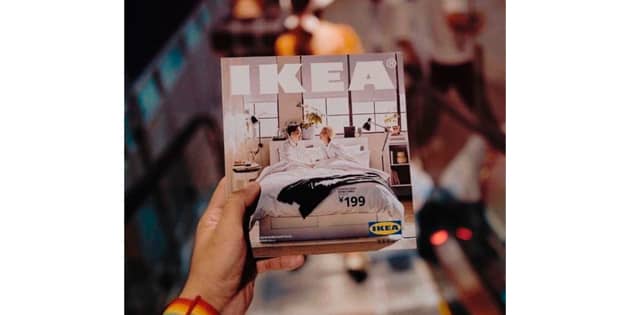 As 2020 draws to a close, every retailer is ready to close the books on this most disruptive of years. Ikea is quite literally closing its books. It is ending the 70-year run of its iconic catalog. The Ikea catalog will be relegated to a museum, where it becomes a nostalgic reminder of days gone by.

On the face of it, Ikea’s decision makes complete sense, as Enrique Dans explains on Forbes.com. It takes the company about a year to produce the typical 300-page catalog, which peaked at 200 million copies distributed through its stores and in the mail in 50 markets, 69 different versions and 32 languages.

Ending the catalog will save the company a ton of money and allow the company to funnel all resources into digital where it sees its future lies.

“The decision to say goodbye to the IKEA Catalogue goes hand-in-hand with the ongoing IKEA transformation to become more digital and accessible,” the company said in a statement. “Last year IKEA online retail sales increased by 45% worldwide,” adding that its website logged four-billion visits, while the company has been developing new apps to service its digital customers better.

After years of dragging its feet to become e-commerce enabled, the company is now jumping in head first into its digital future.

Dans applauds it. “IKEA’s decision will likely be copied by companies of all types in all sectors. Think of the savings that could be made, the useful features provided for users, and most importantly, the environmental benefits. It’s time to follow IKEA’s lead and embrace a paperless future,” he writes.

The practicality of the decision is without question, as the company recognized it was making a rational, rather than an emotional decision. But that’s the rub. Consumers make purchase decisions based primarily on emotions; reason takes a back seat.

Because the Ikea catalog is “beloved,” as the company acknowledges, it is breaking an emotional connection with its customers, a vital connection that it is unlikely to be able to replicate digitally.

People dream in analog, not digital

Reams of data counter the digital-first, digital-only road that Ikea is taking. Good old-fashioned catalogs and direct mail marketing still have power to draw customers to a brand:

The reason why paper in the form of a catalog or direct mail piece is more effective than digital or email advertising all comes down to human psychology and how the brain is wired, what is called neuroscience.

A white paper by MarketReach, entitled “Why Mail Cuts Through,” based on research by Neuro-Insight unravels the secrets. The act of physically holding and reading a piece of mail activates areas of the brain that encode long-term memories 49% more than email and 35% more than social-media advertising.

And when a person receives a mailed message from a brand, it reinforces digital and other advertising so that people pay more attention to all of it. Mail primes the pump so that memory encoding for social media advertising is 44% higher after seeing mail first and it results in people spending 30% longer looking at a social media ad.

Interestingly, the researchers describe the neural network of brand associations in our minds as a Brand Room.

“Brand communication can play one of two roles in relation to the Brand Room,” they write. “The first is to help furnish or decorate the room, by adding or changing associations. However, no matter how well decorated they are, Brand Rooms tend to sit in darkness most of the time. It’s only when something flicks a metaphorical light switch that the associations and sentiments within the room have any impact.”

Ikea’s catalog has held a treasured place in its customers’ Brand Room. By canceling its catalog, it has turned off the light switch in people’s brains.

“Mail can have a powerful affect on furnishing the Brand Room and switching on the light. Brain response shows that mail impacts strongly on long-term memory encoding and engagement. In this way, mail can also build brand equity,” they write, adding that further research shows mail, like an Ikea catalog, is put somewhere visible in the home as a reminder to act and 64% of consumers often take a mailed piece with them to act upon.

Direct-mail expert Matthew Whipple, vice president at Speedeon Data, can’t figure the rationale behind Ikea’s decision other than to speculate it is ignoring the “incrementality” of the catalog and how it reinforces and supports its digital and retail channels in the customer journey.

“People look at the efficiency of paid search, digital ads and Facebook retargeting versus the high direct-mail cost of acquisition and conclude direct mail doesn’t work and digital is really rocking,” he quips.

“But direct mail is really driving the entire funnel process. It is at the upper-end of the funnel and if it does nothing more than help you collect an email address so you can start retargeting when the customer is ready to engage, direct mail did its job,” he continues.

Whipple goes on to explain how this penny-wise, pound-foolish thinking led a company to cut catalog spending, only to leave the company’s sales flagging down the road.

“Just because people weren’t using the coupon in the book to place orders, the company decided its catalog was underperforming and ended it,” he shares. “Then year-after-year, the financials started to drop and nobody could figure out why. They completely overlooked the impact the catalog had across channels.”

Home is tactile and sensual

Planning and decorating a home is a highly tactile, sensual experience. In other words, it functions in an analog world. Ikea, which should know better, is trying to force its customers to do it digitally.

While digital may work at the transactional level and be convenient for the company, Ikea is forcing its customers to follow a path that is fundamentally incompatible with Ikea’s mission: To create a better everyday life for people.

Digital technology can help Ikea fulfill that mission, but the everyday life people live is in the real world, where touch, sound, feel, scent and emotions rule.

Clearly many brands are following the same digital-first, digital-only path as Ikea, since the younger customers it targets are considered the first digital generation. But while Millennials are digital-natives, they are humans too, and there is now way to get around that reality.

“Thirty-percent of Millennials said direct mail is more effective at getting them to take action compared to 24% for email,” Whipple says, citing a study by DMN. “This group may seem like a digital-first generation, but they appreciate and respond to direct mail marketing.”

In five or ten years, the executives at Ikea may be wondering why the lights aren’t shining so brightly in its stores. It will have no one to blame but itself.


About Pam Danziger: Pamela N. Danziger is an internationally recognized expert specializing in consumer insights for marketers targeting the affluent consumer segment. She is president of Unity Marketing, a boutique marketing consulting firm she founded in 1992 where she leads with research to provide brands with actionable insights into the minds of their most profitable customers.

She is also a founding partner in Retail Rescue, a firm that provides retailers with advice, mentoring and support in Marketing, Management, Merchandising, Operations, Service and Selling.

A prolific writer, she is the author of eight books including Shops that POP! 7 Steps to Extraordinary Retail Success, written about and for independent retailers. She is a contributor to The Robin Report and Forbes.com. Pam is frequently called on to share new insights with audiences and business leaders all over the world. Contact her at pam@unitymarketingonline.com.


Read other articles by Pam Danziger

An Open Letter of Solidarity to a 9,000-Year-Old Hunter | GearJunkie