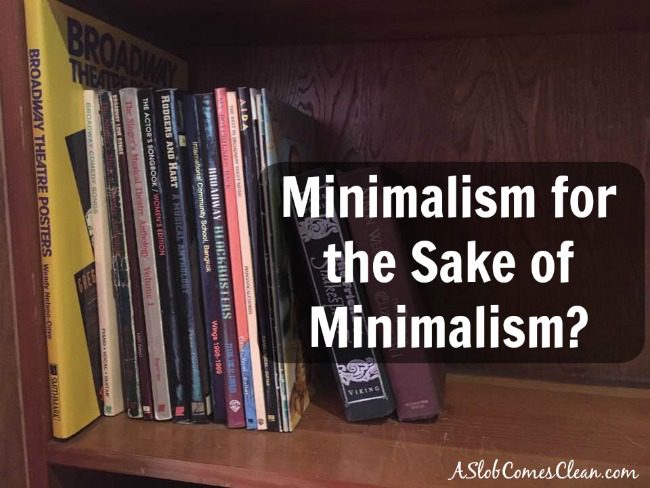 Minimalism is a trend right now, and I think it’s a good one.

I could go on and on about why I think this has happened (we’re living in the aftermath of the newness of credit cards and the belief that there’s no reason to wait for something), but I won’t. Other than that little parenthetical preaching break.

About a year into my own deslobification process, I started hearing the word minimalism. As I realized what it was, and as I experienced how much easier managing my home was with less stuff in it, I wondered if I needed to be one.

It is a good thought, and aiming for minimalism took me far in finding my own Clutter Threshold. The more I purged, the more my house stayed under control.

The more often I could find things when I needed them.

The less often I caused an avalanche (or as my friend Cliff would say, a crapalanche) while searching for my keys. Or my suitcase. Or clean socks.

But, I never got there. And I’m fine with that.

Having a book on my shelf that I’ll probably never read but don’t want to purge doesn’t mean I’m doing something wrong.

I like the big yellow book of Broadway theatre posters that sits on my living room bookshelf. I haven’t opened it in two decades, but it feels like me.

I chose it as one of the free bonus books when I joined a theatre-based, mail order book club in college. At the time, I assumed my life would be full of intellectually stimulating conversations about the latest in theatre news and the themes of longstanding classics.

I wrote last week about grieving the person I thought I would be. But that book doesn’t make me grieve. It just makes me smile when I actually notice it.

The big yellow book fits on my bookshelf which fits in my house. That book doesn’t prohibit my family from living the lives we need to live.

But I also don’t need to get rid of it.

Let me be clear. I don’t believe that those who promote the value of living a minimalist lifestyle are asking people to be miserable.

But people like me, those of us who tend toward ALL or NOTHING and have a very hard time living in between, can easily take it that way.

We think: If minimalism is best, but I just can’t, then I’m doomed to living wrong.

We’re wrong when we think that.

I started thinking about this recently when I got this message from one of you:

“I was getting so caught up in trying to be a minimalist last year that I started getting rid of many special things, for the sake of having a low # of possessions. But I’ve realized that I can enjoy my life and my hobbies (cardmaking, sewing, embroidery, watercolors, graphic art, collecting miniatures . . .) and it doesn’t have to be out of control, IF I TAKE THE CONTAINER APPROACH. I can say ‘Yes, I love cardmaking, this is my card making box’ and not let it overflow. That way I am controlling my stuff, and it’s not controlling me.”

I love this so so much, and it helped me see how aiming for minimalism was very good for me, but achieving minimalism never happened and was never going to happen (at least the way I assumed it was supposed to happen).

I can keep whatever I want to keep, as long as it fits in my container.

Not sure what the Container Concept is? If you’re new here, the main thing you need to know is that you do NOT need to run out to buy containers.

But do check out these explanations:

Containers and Limits and How They’ll Change Your Life Podcast

Ooooooohhhhh, “Contain”ers! Now I Get It!

Baskets – Oh I Get it Now

Or for a crash course that will take you crazy-far in your decluttering process, you need my new book and the video course. The book is Decluttering at the Speed of Life and you can find out all about it HERE. The Five Day Clutter Shakedown will walk you through the decluttering process step-by-step. You can learn more about how to get access HERE.

P.S. I know for a fact that there is a lot more to the idea of minimalism than the negative reactions I described here. I’ve never studied it carefully.

You Decide the Purpose of the Objects in the X4 Series

Apple AirPods Max Turn up the Volume in the Headphone Category