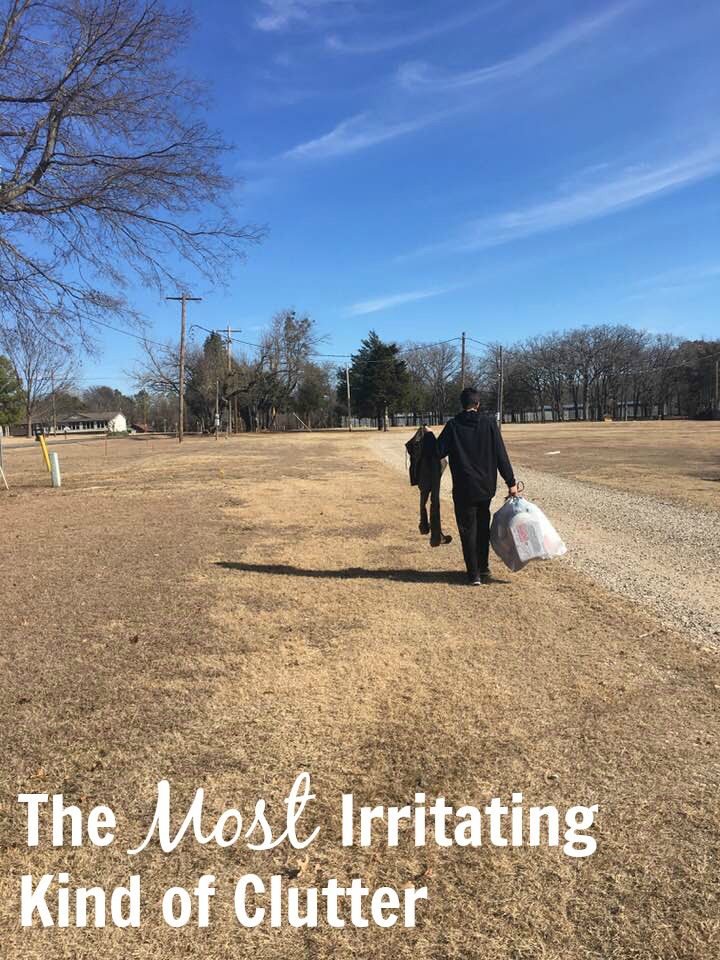 Two weeks ago, we threw away the worst kind of clutter. The kind that has taken up space (awkward space, significant space) for more than a decade in our home, only to never be used. Or, never be successfully used.

I bought these fishing waders at a garage sale years ago. The memory is a little fuzzy, but I think I got them when we lived in a different town. That would have been at least thirteen years ago, and would mean we packed them up and moved them twice.

If you’re not familiar with fishing gear, waders are heavy. And they don’t fold up neatly. (Especially for someone with folding-issues, like me.)

I bought them because they were a bargain price and my husband likes to fish. He’s not really a fish-in-waders fisherman, though.

When need-to-wade situations did come up over the years, though, I’d respond to his stories with a “Don’t forget I bought you those waders” and he’d respond with an “Oh yeah, I always forget about those.”

I’m sure there were years when we didn’t even know where they were, and only had a vague memory that they were somewhere.

So a few weeks ago, when remembering and locating and needing finally all happened at the same time, I was thrilled. Thrilled that my $3ish purchase from 2004ish was finally going to be used.

And then, as I took his cute-as-can-be-to-me picture, loving the look of joy in his eyes and congratulating myself on finally making use of this amazing bargain, I noticed a little blemish/issue/please-don’t-let-that-be-a-hole in one of the legs.

Since I’m not a Expert on Fishing Waders, I hoped that maybe it was a surface wound, an aesthetic flaw that wouldn’t affect the actual function of the waders.

We needed function. He was excited to have these waders to go out deeper into the water because it was cold that day. Bitterly cold. But the man wanted to fish, and when opportunity and cold weather collide, you do what you need to do, especially if you have waders.

He left, and within thirty minutes sent a text asking me to bring him some dry socks.

That itty-bitty hole was enough to let in freezing-cold water.

That itty-bitty hole was most likely why someone else put those waders in a garage sale.

That itty-bitty hole made these bargain waders completely worthless.

We threw them away. I didn’t want someone else to go through all that after experiencing the thrill of finding them at a thrift store.

There’s a chance that hole was the result of sitting through many Texas summers in a garage that feels like an oven.

Whenever the hole happened, this is the most irritating of all kinds of clutter. For years, it was clutter because we never used it. Then, when we finally did use it (to make it not clutter), it turned out to be trash.

How could we have solved this? Using the waders. Sooner. So we could have trashed them sooner.

What Do You Want To Do After Corona? — decor8

How the Ski Bum Was Made

Fischer Transalp Touring Boot First Look: A Light AT Boot for the Masses |...