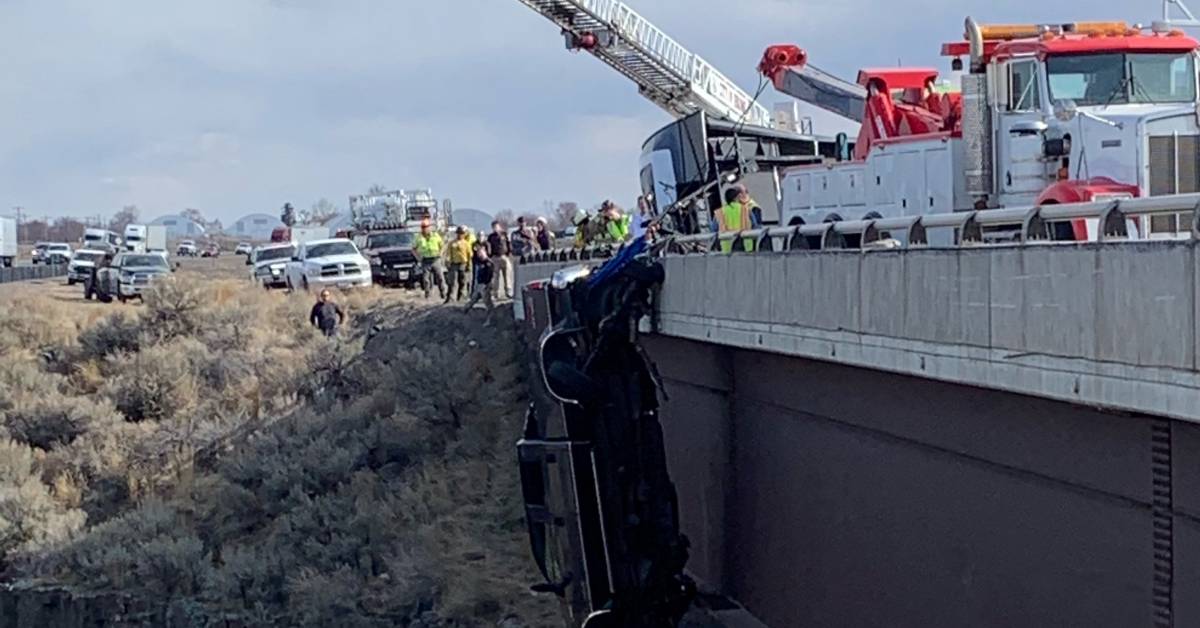 In an amazing twist of fate, no one was seriously injured after a truck crashed through a barrier and tipped over a bridge.

They’re called “safety chains” for a reason, but perhaps never for this reason. In a shocking Facebook post on Monday, Idaho’s Magic Valley Paramedics (MVP) shared images of a Ford pickup dangling perilously over the edge of a bridge.

According to the Idaho State Police, witnesses on Interstate 84 saw the driver of a 2004 F-350 pulling an approximately 30-foot camp trailer lose control. Witnesses told police the truck hit the right-side barrier, then swerved and smashed into the left-side barrier, eventually tipping over the barrier and nearly plummeting into Malad Gorge some 80-100 feet below.

Nearly, but not quite. In an unbelievable turn of fortune, the safety chain connecting the pickup and camper held the entire weight of the truck — which dangled facedown into the gorge — while the camper remained pressed against the barrier.

Responding to the call, an Idaho state trooper arrived on the scene, milepost 142, at 2:42 p.m. He called down to the vehicle, and the occupants, a 67-year-old man and a 64-year-old woman, responded they had no serious injuries. The Gooding County Sheriff’s Deputy arrived shortly after, and the two obtained additional safety chains from a semi-trailer at the scene and attached them to the truck, providing additional support.

Soon thereafter, the MVP Special Operations Rescue Team (SORT) arrived via helicopter, rappelled down, and attached harnesses to each of the occupants. They also rescued two small dogs that were in the truck. All four occupants were transported safely with what officials said were “non-life-threatening injuries.”

“This was a tremendous team effort that took a quick response and really showed the dedication and training of our community of first responders,” said Capt. David Neth of the Idaho State Police District 4 in Jerome, Idaho. “This is something we train and prepare for, but when it happens and people’s lives literally hang in the balance, it takes everyone working together, and then some.”

Behind the Scenes at Fine Gardening – FineGardening